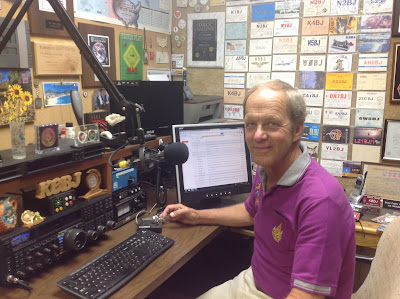 Bruce Frahm was first licensed as WNØTAS in October 1967.  Shortly after upgrading to WAØTAS he often heard the exotic callsigns RAEM and UPOL 22 on 20 Meter cw during summer evening sessions at the radio . Not wanting to lose his license for communicating with these peculiar callsigns he feared might be “non-ham” stations, the inexperienced operator never answered those CQs!

In 1979 Bruce signed on as radio op. aboard Windjammer Barefoot Cruises’ m/s Yankee Trader.  The ten month circumnavigation visited 55 ports. Favorite activations were KØBJ/CEØ on Easter Island operating from the QTH of Fr. Dave CEØAE, VR6BJ from the QTH of Tom VR6TC and Betty VR6BC Christian, and operations from many islands in the Pacific. On a side trip Bruce visited Fr. Moran 9N1MM and made some QSOs from the famous station at the foot of the Himalayas. 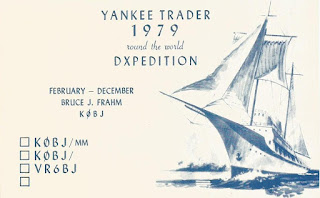 Dr. John, the medical doctor  from the Yankee Trader circumnav was one of nineteen winterover personnel at Amundsen-Scott South Pole Station 1981-2. The National Science Foundation granted him control op privileges at KC4AAA. Bruce and John kept a weekly sked, running phone patches and visiting about polar life for 2-3 hours. 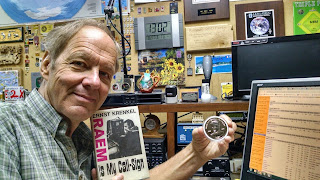 Thanks to a tip in K1KI’s informal newsletter “USSR Tidbits”  KØBJ became aware of Krenkel’s autobiography RAEM Is My Callsign.  Bruce obtained a copy and enjoyed the story although it increased his annoyance at not having logged the well-known call!

Bruce ventured north with well-known Antarctic phone patcher K2BPP,  another ham and eight skydivers in May 1980, intending to “do their thing” at the geographic North Pole.  They outfitted in Resolute Bay where Bruce operated the weather bureau amateur station using the special call CK8MB. 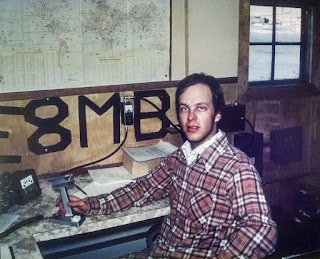 A “warm front” which brought persistent  -30C temperatures and fog to the frozen Arctic Sea thwarted their attempt to operate from the sea ice right at 90 North but they made QSOs with the self-assigned call 1NP while the skydivers parachuted, 360 miles short of the geographic pole. 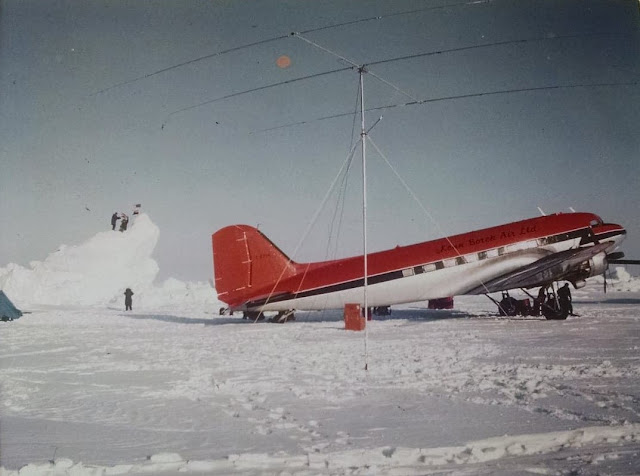 Landing on the sea ice was accomplished by finding a polynya -- a freshly frozen lead that had not yet formed pressure ridges.
The beauty of the Arctic was awe-inspiring, especially at Grise Fiord on the southern end of Ellesmere Island during their return. Bruce and a New Zealand friend joined their outfitter on an attempted Skidoo trip to Beechy Island to see the winterover camp of the doomed Franklin Expedition. Once again foggy weather was a problem but the outing and navigating the sea ice were memorable.

While visiting Leningrad in 1987 after a visit to the SRAL Summerfest OH7C in Joensuu, Bruce saw a yagi at club station UZ1AWA on Lt. Schmidt Embankment late one August night. After knocking on the door he was welcomed by a SWL who showed him the station. Utilizing Q signals, gestures, the SWL's patience and Bruce’s limited understanding of the Cyrillic alphabet, they had a two minute conversation over the next half hour (HI) – while SWLing the ham bands.

In1994 KØBJ was elected to represent the Midwest Division
of ARRL as Vice
Director, and became Director in 2006. In 2010 ARRL’s board elected him Second Vice President. Bruce enjoyed the chance to represent hams of the Midwest, and attend hamfests in the division as well as throughout the USA and even the world. He's now an ARRL Honorary Vice President. 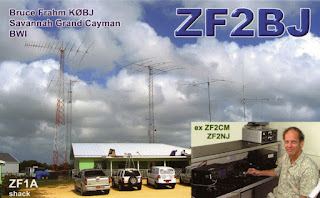 The winter climate of WØ-land is not as harsh as most of UAØ-land but it is cold enough that KØBJ and family have happily traveled to the Cayman Islands in January most of the previous 35 years. Bruce has operated as ZF2CM  ZF2NJ and his current ZF2BJ call. 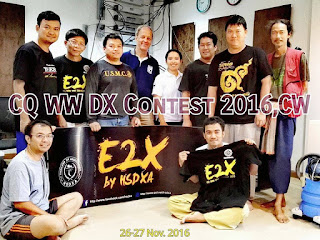 His son Jon KBØMBS emigrated to Thailand in 2007 and teaches English classes at Rajabhat Uttaradit University. Bruce visits his Thai family in November-December and operates as HSØZLB. He is often part of the multiop team at E2X for CQWW CW. 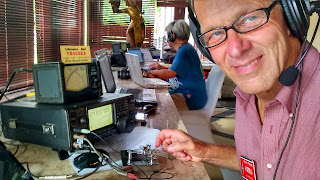 KØBJ and 4 other US amateurs attended the 6th SEAnet convention in Jakarta in 1976. On their way they had eyeball QSOs with BV2A/B and HS1WR. Now on recent visits to HS-land Bruce, his daughter-in-law and granddaughter have visited the 42nd SEAnet convention in Bali, and the 44th in Pattaya.

In 1999 the more than decade-long IOTA DXpedition of KM9D/KF4TUG was just underway. An overloaded receiver front end at ZF2BJ caused by ZF2MO led to some eyeball QSOs between Bruce, Mike and Jan. Bruce readily agreed to be their LoTW QSL manager. Many QSOs and happy memories ensued. Now, with the illness of OM2SA -- Mike and Jan’s paper QSL manager -- Bruce has been discovered as a source of homebrew QSLs suitable for IOTA confirmations. The work load has been fun as Bruce enjoys this reminder of Mike and Jan’s travels, and his own /mm adventures from the relative comfort of a 50 meter steel-hulled motor sailer! 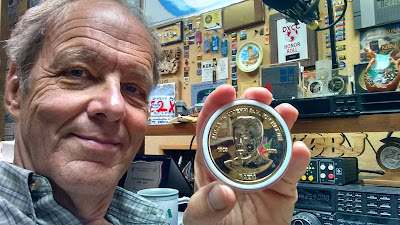 It is a chance honor to receive Krenkel Medal #88 -- I send Love and Kisses. I have enjoyed more than a half century of fun and learning on the ham bands. Spassiba bolshoi.     Bruce KØBJ.